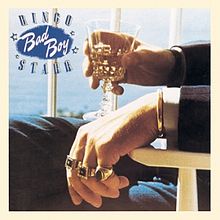 History: Since Ringo the 4th was largely panned by critics, Ringo and his writing partner Vini Poncia decided to go back to basics. They only wrote two songs for the album, the rest being filled out with songs from other songwriters, though none of them the famous friends that Ringo was known for using in his earlier solo days. A lot of the songs were hits for other people though.

My own personal history and initial impression: Another day, another Ringo album. Or at least that’s how it’s starting to feel. With John in retirement and Paul and George obviously taking a bit more time, Ringo has been churning them out, and I have to admit I’m a bit fatigued with them. The first night I went to listen I decided I’d much rather do something else just then. But I’m not ready to give up just yet.

Review: Unfortunately back to basics for Ringo seems to mean back to bland. I understand that obviously Ringo doing disco wasn’t everyone’s cup of tea, but most of the songs here are not my cup of tea either unfortunately. A whole lot of sad and gloomy songs about how a woman did him wrong. If more of them had been in a country style that might have worked, but sometimes they’re odd jazzy and blues numbers that just don’t quite work for him. The title track of the album had me cringing, with its “Bad boy-oy-oy-oy-oy-oy-oy-oy” refrain that just doesn’t do anything but come off as really awkward. I had a problem with some of the sentiments of the songs too, like “Hard Times” which suggests that his woman is really mean to him some of the time, but sounds like the main reason she does so is because he’s a drunk. Or “Tonight” which is a sweet love song on the surface but the words are all about how much he can’t believe she would possibly want to be with him right now, so you feel like, yeah, maybe she should leave and find someone else more worthy. He didn’t write any of these songs, but the fact that he chose them reflects a lack of good taste in itself.

The one real highlight of the album is “Where Did Our Love Go,” a cover of the Supremes song. It’s nice to hear Ringo return to singing girl group songs like he sometimes did in the early Beatles era. I’m not sure what it is that makes these suit him so well, but he’s great at them. Can you imagine an album called Bad Boy where it’s nothing but him covering various girl group songs? I think that would be fantastic, and I really wish we had gotten that instead of this.

Another odd note is that the album ends with “A Man Like Me” which is literally just the final song from Scouse the Mouse with the word “mouse” changed to “man.” My thought was maybe it was a way for him to release that song as a single out of context of the children’s album, but if that was their thought they never went through with it, releasing some of the other songs instead. None of which managed to chart. There are much worse ways to spend thirty five minutes of your life than listening to this album, but there’s also a lot of better ways to spend it too. I can only hope that Ringo gets his act together sooner rather than later.

There is at least one positive note I can end this on, and that’s the fact that Ringo starred in a TV special to help promote this album. Simply called Ringo, it has a prince and the pauper story where Ringo was born on the same day and time as another man Ongir Ratts, who looks exactly like him. Ongir is a bit of a nerd, he makes his living selling maps of the star’s homes, and his father (Art Carney) steals all his money and just overall treats him poorly. His one ray of sunshine is his girlfriend (Carrie Fisher). Ringo is being slave driven by his manager (John Ritter) and when he spots his double outside he takes it as his chance to get out. Ongir isn’t too good at pretending to be Ringo though, and his manager brings in a hypnotist (Vincent Price) to try to cure him. While not a masterpiece of writing, it’s all very charming and silly and interspersed with the action are music sequences where Ringo sings “Act Naturally,” “Yellow Submarine,” ‘You’re Sixteen,” and “I’m the Greatest.” It’s also narrated by George Harrison, pretending to give a press conference before Ringo’s big show that night. Ringo and Ognir switch places just in time for Ringo to play the concert which is a few songs off this album. He also gives Ognir a happy ending by hiring him to be his road manager. Since it’s freely available on Youtube, I highly recommend checking it out if you’ve got the time.

Next Time: George Harrison puts out a self titled album.